Developing a product involves lot of time and cost. So, to ensure it is done effectively, it is important that you along with your product team review the common pitfalls of product development.

Most of the entrepreneurs are concerned about the major mistakes that their product team make during product development that stop them from coming out with the product that meet the customers’ needs and, thereby attaining the growth level they want.

It is a known fact that majority of new products introduced in the market end up as failures. According to Harvard Business School, only 40% of developed products make it to market and of that 40%, only 60% will generate any revenue at all. Sometimes products that look great idea on paper fail to deliver to customers. Just think of HP Touchpad, New Coke, or Crystal Pepsi, to name a few. These products seems promising but eventually failed for a number of reasons. 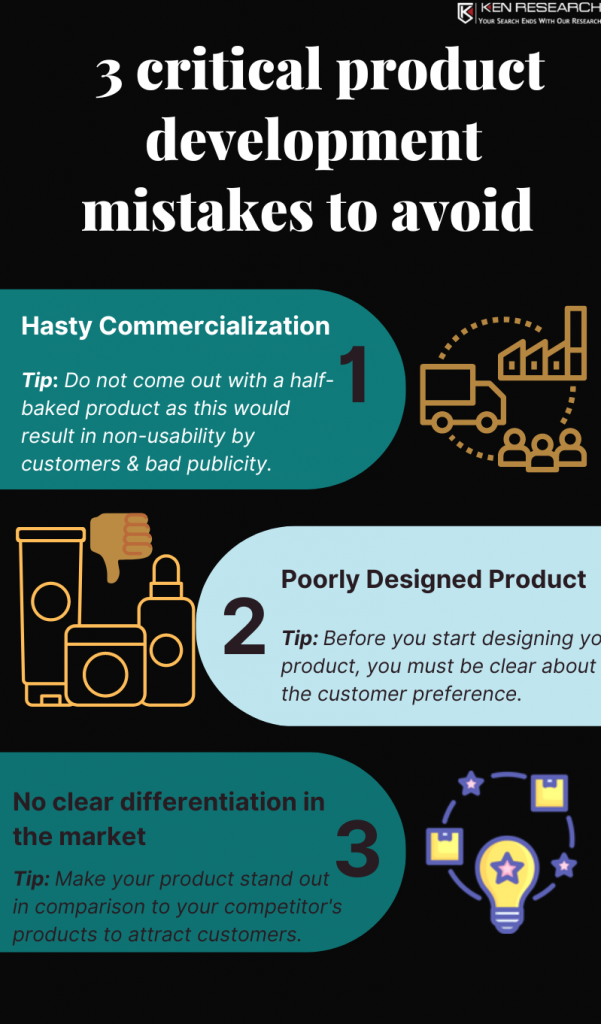 To avoid such scenario, it is important that you do not overlook these three critical mistakes that you need to avoid, so you can get to market faster, and with the right product.

Most of the time organizations are worried about the competition, and thereby introduce their product to the market even before it is completely ready. And this results in failure of the product as lot of features still remains to be added, and so when bought by customers (even the loyal ones) they find it performing unsatisfactorily, and in turn this leads to a bad word-of-mouth publicity for the new product. Ultimately, even later on features are added and the product is improved, it may prove to be too late to do any good.

For example to compete with the newly launched iPad, HP released the Touchpad in 2011 with a huge event and expensive advertising. However, it was evident as soon as it came to the market that HP had rushed the release of its product with a poor operating system and lots of bugs. Sellers soon were forced to slash prices; eventually HP discontinued the Touchpad and took a loss of millions of dollars.

Failure Point #2 – No clear differentiation in the product offered

Differentiation is, exactly, what separates your product from your competition. Your customers will simply leave your brand for another if you do not find ways to stand out from the crowd. But at times it happens that the enterprises overlook and come out with a product that does not offer much value proposition to their product. And, ultimately it leads to discontinuation of the product.

“If you’re not remarkable you’re invisible.” – Roy Osing (Author of ‘Be different or be dead’)

Consider the example of Microsoft which launched the Zune as a competitor to the iPod. Its biggest failure was that it was not only late by 5 years in comparison to its competitor Apple which got itself firmly established by then, but also there weren’t any innovative or differentiating features to entice people to buy a Zune instead of an iPod. Instead of improving on problems from the iPod, Microsoft made a very similar product that didn’t compel people to buy it, and thus it was eventually discontinued in 2011.

Many of the new products are seen to be unusable because the product is poorly designed and was not tested for usability. You need to ensure that you do not overdesign, as then your customers will find it difficult to do what they are supposed to do, which will lead to poor user experience. While, if on the contrary you stick to just the minimum features in your product, then this may make your customers feel that there is nothing new about your product offering and they will obviously prefer other competitor  products that provide a some add-on.

Take the case of Crystal Pepsi, a clear cola introduced by Pepsi. After spending millions of dollars on development, it realized that there was no requirement of carbonated drink with atypical color by their customers, and the new product failed miserably

Product failures are extremely costly affair for enterprises, both in terms of their budgets and their reputations. Developing a new product is always a gamble, but by evading the above mentioned mistakes can help avoid potential future failures, and can be the difference between a successful product, and a failed project.

That’s our list of three mistakes that needs to be avoided when developing new products; we would love to hear your product development pitfalls! Do comment below.

The post 3 Product Development Mistakes That Enterprises Make That Stop Them from Becoming Market Leaders appeared first on Ken Research.