The cryptocurrency market has gained immense popularity in the last few years as large businesses and investors are interested in the new opportunities and benefits associated with this digital ‘currency’. Cryptocurrency, or crypto, is designed to act as a medium of exchange and exists entirely online. Supported by blockchain technology, cryptocurrencies operate without the need for central authority and exclude certain processing and transaction fees. Since these digital assets are not endorsed by a bank or other traditional lending institution, transactions made using cryptocurrency are highly encrypted, and a person’s personal information is subsequently kept secret.

The advent of digital coins has given consumers the opportunity to make new investments without offering traditional banking products. There are a number of advantages to investing in cryptocurrency, some of which include elimination of banking fees, easy access to broader investment opportunities, lower transaction fees for international financing and direct control over investments. It is estimated worldwide Cryptocurrency market Will record a double digit CAGR until 2027. 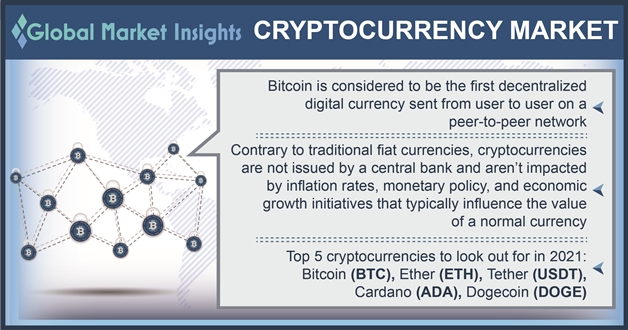 However, like its various advantages, cryptocurrencies are also limited by some flaws such as lack of control and supervision in most countries, cyber security issues, volatile standards, limited usage and infrastructural stability issues due to rapid growth.

Why is Bitcoin dominating the cryptocurrency market?

Bitcoin is considered to be the first decentralized digital currency to be passed from user to user on a peer-to-peer network. It was created for the purpose of cutting off any kind of intermediary in a transaction. Unlike traditional Fiat currencies which are depreciated over time due to unlimited supply, Bitcoin is inflationary because they are limited in number.

According to the report, only 21 million bitcoins are currently available in the market. With its demand increasing at an indicative level, the price of Bitcoin may rise in the coming years, but subject to certain volatility responsible for external factors. The overall cryptocurrency industry was greatly influenced by the growing awareness about Bitcoin and the inspired alternatives.

It is wise to mention that bitcoin mining still stands as an energy intensive process. Analysts at the International Energy Agency (IEA) say the energy used for bitcoin mining has steadily increased since 2016, hitting an all-time high of 149 terawatt-hours (TWh) in 2020 and accelerating sharply. Compared to these statistics, Google’s total power consumption stands at 12.2 TWh, where approximately 200 TWh of power is used by all data centers around the world, in addition to those that mimic bitcoins.

However, as a solution, many companies are now looking for ways to mine bitcoin using renewable energy, thereby reducing its impact on the environment. Recently, American Financial Services and Digital Payment Company, Square, Inc. The blockchain technology company has announced its partnership with Blockstream Mining to develop an open-source, solar-powered bitcoin mining facility in the United States with the aim of adopting renewables and increasing efficiency. In the Bitcoin ecosystem. Similar efforts worldwide will create a better view of the cryptocurrency industry among commercial users.

What makes cryptocurrency so volatile?

Unlike traditional fiat currencies, cryptocurrencies are not issued by the central bank and are not affected by inflation rates, monetary policy, and economic growth initiatives that typically affect the value of a common currency. However, the value of cryptocurrency may be affected by some other factors such as its supply and market demand, cost of producing digital currency (such as for bitcoin through mining process), emergence of more competitive options, trading and exchange platforms, sales rules and internal governance.

Bitcoin, for example, recently made headlines when its value plummeted when Tesla CEO Elon Musk expressed concern that the amount of electricity needed in the coin mining process was having a serious impact on the environment. Events such as China’s crackdown on cryptocurrency mining and transactions have also significantly affected the value of bitcoin, ultimately spreading panic and uncertainty among crypto traders and investors about its acceptability. Doubts about the value of Bitcoin among consumers have kept many people away from the cryptocurrency market as a whole.

How will cryptocurrency disrupt the banking industry?

Cryptocurrencies are independent of the central bank. The intrusion into the traditional financial system has raised concerns among regulators about the risks associated with these digital assets. However, banks may be more likely to be restrained as direct or indirect exposure to cryptocurrencies is expected to be limited. If cryptocurrency becomes an asset class, its impact on financial services firms could gradually diminish under the guise of an integrated approach by global policymakers and regulators.

With the help of blockchain technology, which enables the creation of a shared digital transaction ledger, financial services firms may consider adopting cryptocurrencies more widely in the coming years. Earlier, many countries were ignoring the issue of crypto adoption. Both China and Vietnam banned the use of cryptocurrency as a legitimate means of payment a few years ago. Now, the Vietnamese authorities have begun research into the technology to evaluate and develop regulations for the use of crypto.

As of June 2021, China and Vietnam were in second and tenth place, respectively, in terms of profits earned in crypto form. But when it comes to banking, China in May this year barred financial institutions, including banks and online payment channels, from offering cryptocurrency transaction related services and warned investors against speculative crypto trading because they could be virtual currencies and their prices easily. Clearly, the banking sector still has some way to go in consolidating cryptocurrencies in most countries.

Top 5 cryptocurrencies to look for in 2021


Bitcoin (BTC) is one of the most popular and highly valued cryptocurrencies on the market and is expected to dominate the cryptocurrency industry despite price volatility. Although the value of Bitcoin is unpredictable, it has seen a steady upward trend over the years. Its price rose to over $ 60,000 in April 2021, with market capitalization reaching over $ 1 trillion, the report said.

Ether is the second largest cryptocurrency in terms of market capitalization after Bitcoin. Compared to Bitcoin, Ethereum allows individuals and companies to do more than just transfer money between entities. It offers a variety of exchange methods, including cryptocurrency (Ether), smart contracts and EVM (Etherium Virtual Machine).

Compared to other cryptocurrencies such as Bitcoin and Ethereum whose prices tend to fluctuate, the cost of Tether is more stable, helping to distinguish it from other currencies. Teaters are easy to buy and sell and are often used as a way to hold money on the exchange when investors feel the market is extremely volatile.

Cardano’s ADA token aims to address the scaling and infrastructural problems that were once observed with Bitcoin. By implementing a settlement and computational level, Cardano ensures unlimited scalability and fast transactions. It aims to address issues related to interoperability, scalability and stability in cryptocurrency platforms.

Dogecoin was established as a joke for crypto enthusiasts, but is now one of the top cryptocurrencies on the market. Recently, cryptocurrency has attracted the attention of some large global companies. For example, in 2021, SpaceX revealed that it was considering creating the first cryptocurrency using doscoin used to finance a space trip.